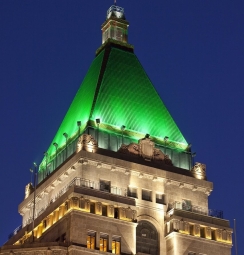 The building has played quite an important role in Chinese history:

The larger building, Sassoon House, was the first high-rise building built by Sir Victor Sassoon. Completed in 1929, it was also one of the 1st skyscrapers in the Eastern Hemisphere. The 10-story building has a penthouse at the top, where Sir Victor once lived. The building is designed in an art deco style throughout, from its exterior design to the interior decor. The building mostly features granite facing, with terracotta surfacing on the 9th floor and roof. The side facing the Huangpu River and The Bund features a steep 33-foot pyramidal roof faced with copper, which has since corroded to a light green color (top). 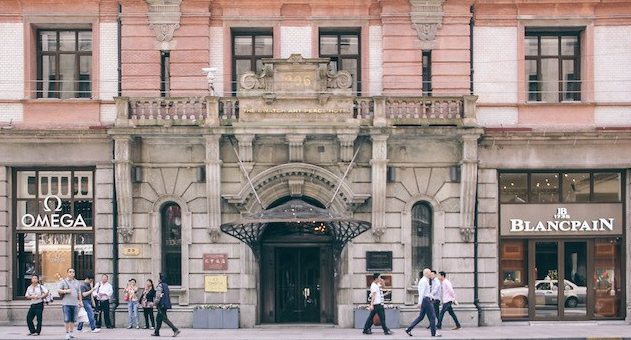 The smaller, yet older, South Building (above) actually dates back to the 1850s, when it was known as the “Central Hotel”. In 1903, it was renamed the “Palace Hotel”, and was the first building in Shanghai to offer two elevators. This 6-story building has a brick veneer and is designed in a Renaissance style. Like the North Building, the South Building was also renovated in preparation for the 2010 World Expo. It emerged as the Swatch Art Peace Hotel and now hosts artists from all around the world who temporarily live and work here in apartments that double as workshops. A specialty Swatch, only available here, features the Shanghai skyline (below)!

In popular culture, the hotel served as the inspiration for the novel “Shanghai ’37” (1937) by Vicki Baum, aka “Hotel Shanghai” and “Nanjing Road“. Additionally, the hotel’s Old Jazz Band served as the basis for the recent movie “As Time Goes By” (1998) by Uli Gaulke. It also features in other movies set in the city, such as “Shanghai” (2010), featuring John Cusack and Gong Li. 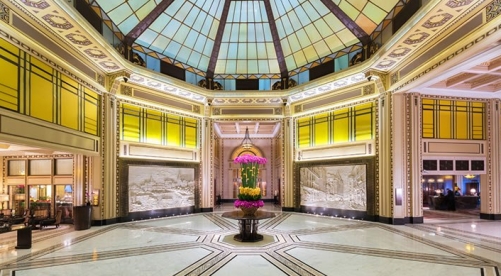