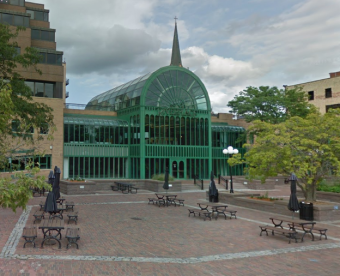 Along with the nearby St. Anthony Main complex, Riverplace was an attempt at an urban shopping mall on the east bank of the Mississippi River. The Japanese Kajima Corp. and Dai-Ichi Seimei America Corp., in partnership with a local developer, originally built the complex in 1984 across the Mississippi River from downtown Minneapolis for $120 million. In addition to a 27-story apartment tower, condominium complex and original 80,700 sq ft of office space, its centerpiece was a 95,000 sq ft “festival retail” shopping center which emphasized boutique shops.

Unfortunately, by the end of the 1980s, it was clear that retail aspect of the project wasn’t working. It shifted its strategy in the early 1990s, in order to emphasize entertainment venues, such as an enterprise called Mississippi Live, which featured several themed bars under one roof. This venture, however, died as well after the city revoked its liquor license for not paying state and city sales taxes. Today the complex is mostly office space.